Another Dead MTG Board

Thanks for that info Khaos, it was appreciated! I haven't played Standard since GP Stockholm last October (I've played almost only Modern this year), so I basically have to YOLO this thing.

The deck's YOLO game is strong. 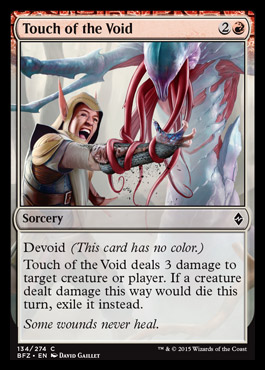 Why does it have to be a sorcery...
҉
Top

man it's almost like they wanted these eldrazi to possibly be playable without them printing absurd ramp or all the kiddies dying on turn four to red.
Top

If I can't kill better players on T4, what's the point of playing?

If I can't kill better players on T4, what's the point of playing?

To crush your enemies, to see them driven before you and to hear the Lamentations of their women
Top

He and his lotus cobra buddy gonna getcha
Top

I am not wild about this set.


Well actually Eldrazi do interest me.. however I can only see it in Standard, which I have decided not to partake actively

Allies I was really looking forward to, but the first ally spoiled in the duel decks
worried me and as the spoilers wore on, it was clear that Allies haved changed. For better or for worse, but it was'nt the allies that I looked forward to. STILL, the g/w ally was'nt too bad and could be tested in my modern ally, so thats cool.

I like the dollups of Eldrazi frankly, I am sad that they weakened eldrazi tho.


To me standard was the forefront of tech. It was new direction, new cards. But that was in the past. These days it is rehash after rehash in the name of conserving design space. Which is understandable and fine.

I am just sad that standard is now just a passing fad for a few years before and now what? 1.5 yr before it rotates into oblivion? This is my concern. Thats if you print only limited stuff in standard, none of those cards will translate well into eternal. Which is sad for the partakers of standard.

Now the past few sets have seen modern playables printed in standard. That is to be lauded. Printings of legacy and vintage material is a dicy and difficult business so I do not fault them for maintaining sanity in standard. However the leap from Standard to modern should not be a non entity. Siege Rhino, being playable in modern is a very good thing. Same for things like Lilianna, mana confluence? I dunno I am sure there are many many others that I am sure. That is a good thing. Legacy and vintage playables will be a bonus (Snaps, lili, baby Jace).

Actually thinking about it there was an upswing in power since M15 so I am actually quite happy. Until this set I guess.

Now this current set may see playables, I am not ruling that out. But it does look a little lackluster so the assumption I am making here is that it is a limit and standard only set.


I actually think that Kahns was the perfect set. The mistake of printing delve was how I think it should be done. Pushing the envelope and if it becomes a problem ban it. It is usually not a problem in standard anyways but in the eternal formats (which are alot more hardy).

This might be a problem. Since a player in eternal has little or no incentive to play standard or limited (unless said player actually enjoys those formats)

The question is whether wizards even support eternal? As the way to milk appears to only be from supplementary product. Printing eternal viable stuff may actually reduce business for limited and standard.

Now if wizards follows that line of thought and prints only limited and standard stuff (which BFZ seems to imply). I will truly have no reason to buy new products.

For what its worth I buy a case or two of each set (yes even BFZ), my thinking is at worse I get a block cube of some kind. Which is my way of consoling myself Smile I really look forward to the bright spots in each set that would contribute to the eternal pool. I can only take take buying block cubes for so long.... after a few sets it may be goodbye to current magic and I'll just hideaway in eternal. Or not. Since this is really Magic: the Addiction right


Passable but not hopeful.


[edit]
Just in case any one thinks I am just interested in power. My favourite card in Kahns is actually Flying Crane Technique Wink So no I don't love Kahns for the powerlevel only, I loved it before that.

Do mtgs posters take themselves that seriously in everything or is it just mtg?
Top

The X/X for X excites me on a spiritual level, but tbh I could take or leave the rest of the set.

Oh and any excuse to build a trainwreck of a manabase w/Eye of Ugin + Eldrazi Temple for casual giggles is fine by me.
Top

Chimeric Mass was never good in Standard and it survives sweepers

I'm a Magic weirdy and playing Eye of Ugin -> Eldrazi Temple -> Endless One in a casual deck makes me happy. Agree that the card is Not Great, tho definitely expecting someone to find some nuts interaction w/+1/+1 counters.
Top

Every deck I've brewed for post-rotation has been shit. Notably, all of these decks feature zero Siege Rhino. If this Grixis Dragons deck doesn't do well tomorrow, I'll be forced to play the Rhino on Saturday...
Top

New standard, can someone dump all the threads into the old standard section?
Top

New standard, can someone dump all the threads into the old standard section?

I moved the old stuff from competitive and developing to the archives subforum.

I left some threads because I didn't knew better, let me know if something more should be archived
Top

well probably w/r aggro is not a thing anymore. It existed mainly because of chained to the rocks and the card rotated out
Top

Alright, retired that one too.
Top

Voyeurlands
when it enters the battlefield, it checks to see if 2 basics are doing their thing. If there is, it comes into play erect.
Top

well probably w/r aggro is not a thing anymore. It existed mainly because of chained to the rocks and the card rotated out

I thought it stopped to be a real deck with DTK o.o
Top

It was killed by dromoka's command, but if you didn't face the card it was still solid. Now that chains rotated though there is no real reason to play r/w
Top

Voyeurlands
when it enters the battlefield, it checks to see if 2 basics are doing their thing. If there is, it comes into play erect.

There's about 4 or 5 tracks I REALLY love. The rest may take some time to grow on me.

My opinion is that it's their best album so far.

I played my first BFZ draft yesterday. I drafted a very streamlined GR Landfall deck with only Rolling Thunder for removal.

My round one opponent was playing 4-color GB. Because that turn of phrase for a deck is obviously bad and inconsistent, I chewed his face off in short order. After the match, I offered a handshake and said "good games." After our handshake transaction ended, he paused and said "wait... ... Ok so don't take this the wrong way, but when someone loses, it should be on them to say good game or not. I got land screwed..." And my eyes kind of glazed over. When I was done being lectured, I asked him if he would still be concerned about this moment when he woke up tomorrow. He said no and I told him good luck next round. I asked other people about this after the match. Two of two people agreed I was in the wrong.

My point is that we need another 9/11, the first one has already stopped doing its job.
::Buy from me on TCGPlayer::
Top

I went on to win the tournament because apparently 1/1s that become 2/2s are insane and the unplayable Steppe Lynx of drafting yesteryear look very different today.
::Buy from me on TCGPlayer::
Top

whatever people get mad. take the path of least resistance and dont offer a handshake when you win but always offer when you lose. You're not wrong but whats the point in defending yourself
Top

whatever people get mad. take the path of least resistance and dont offer a handshake when you win but always offer when you lose. You're not wrong but whats the point in defending yourself

Or just offer your hand every time and let them get pissed. If they're too sore to shake your hand, that's on them.
҉
Top

Piss on their car's door handle

Originally posted by Galspanic on MTGS

I would still like to see the posts sent over to ( N_S ) and have the Salvation Gutter archived away and replaced with a link to MTGC.

Thank you for all the lies. Another fine display of integrity by iridium

Return to “Fires of Salvation”

Users browsing this forum: No registered users and 0 guests